Welcome, Friends! Glad you’re here for some tips to organically manage those pesky harmful garden insects so you’ll have produce left to harvest! All yards and allotments will have harmful garden insects every year; it’s part of nature.  These insects need to eat in order to feed the beneficial insects.  Eliminating ALL the harmful insects from your garden would be time, labor, and resource intensive. You also run the risk of depleting the food source for beneficial insects and other animals that feed on the harmful critters.

Wise Goal – An important and wise goal is to control the harmful garden insects enough to reduce the damage to your garden to a manageable level.  Meaning that by harvest time, there is something left for you to eat.  Losing one or two tomatoes is manageable and probably hardly noticed, but an entire decimated crop means there’s a problem to address. Aphids – One year we had aphids on our herbs which was easily treated by spraying the affected plants with neem oil, a wonderful organic product found at Western Gardens.  This significantly reduced the number of bugs.  They were further kept at bay by some helpful ladybugs, also found at your garden shop. We were careful to thoroughly wash our herbs before eating them to remove any remaining aphids. Washing anything you harvest before eating it is always a good idea anyway. Leaf Miner – Last year, our challenge was leaf miner larvae on our Swiss chard.  In this case, we simply discarded any leaves that had been extensively chewed.  Otherwise, we snipped off the parts that didn’t look as appetizing, like anything that had a visible egg attached to it (usually on the underside of the leaves), washed everything, and then enjoyed our tasty green salad. This year, now that we know to look for the leaf miner eggs on the leaves, we were more attentive with our starts for our garden and inspected them daily, looking for them or other harmful garden insects.  We found eggs on our pepper plants and did our best to remove them when the plants were small.  We used a piece of duct tape wrapped around a finger to remove the eggs. We found that using a gentle fingernail was still too rough for the tender young leaves, so gently touching the tiny eggs with the sticky duct tape easily lifted them off. Once the plants were more mature and could withstand a little insect activity, we were less vigilant at egg removal, but still mindful of looking for eggs once in a while.  Read more on homemade remedies for treating leaf miners by clicking here. Squash Bug – This year, we planted pumpkins for the first time.  We had heard of the dreaded squash bug and had been looking for them but hadn’t seen any damage to the plants.  Then, just last week (late June), one of our pumpkin plants was nearly devoured overnight by something. 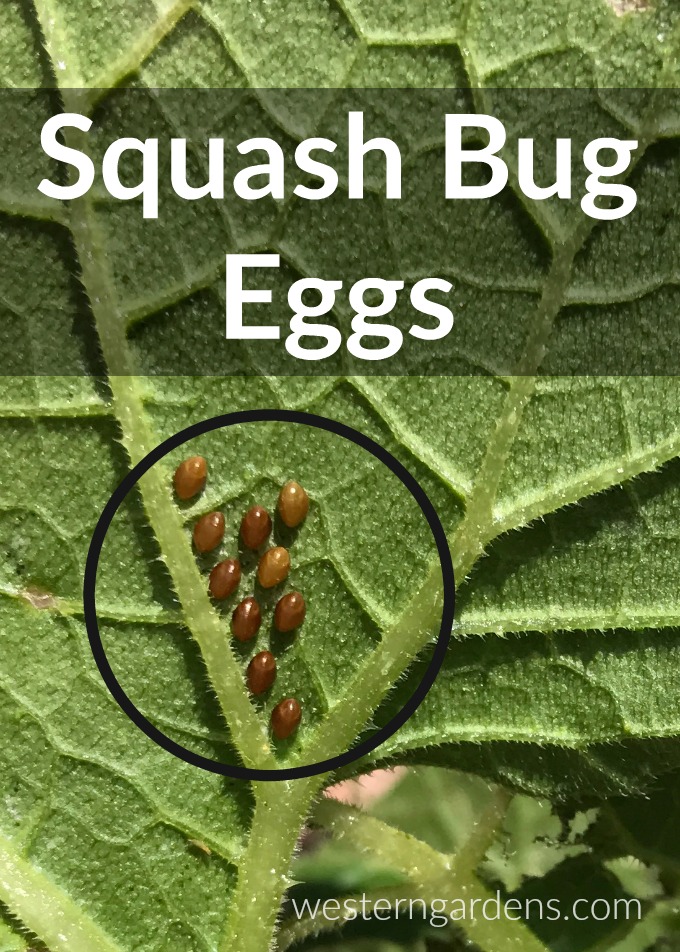 We assumed it was the infamous squash bug.  This assumption was reinforced when, upon closer inspection of the plant, we found a mating pair of squash bugs with a third one waiting on the side-line and eggs attached to the underside of the remaining leaves and the stem. We posted photos of the damage to a Facebook gardening group and learned of some other likely culprits.  That night my husband went out with a headlamp and a bottle of neem oil to investigate. Earwigs – Someone suggested the damage looked like the work of earwigs.  My husband found several earwigs eating on the plant and a swarm of them hiding in a nearby crevasse. Earwigs are a complicated insect in the garden.  They are not only harmful, but also beneficial.  They aid in breaking down organic matter (composting) and they also eat aphids and other harmful insects. However, when there are too many of them around a young susceptible plant, they can be very destructive.  We could also see evidence of earwigs damage on a few leaves of nearby tomato plants.  This minimal damage doesn’t pose a risk to a plant that has hundreds of leaves to perform.  In comparison, the pumpkin plant had only a dozen leaves to start with and most of those were very damaged. My husband sprayed neem oil on the earwigs on the plant, in the swarm nearby, and even in their nest. It’s still uncertain whether the plant will survive though it already shows signs of new growth. We monitor it closely to prevent another insect attack that would probably kill it.

Another organic alternative that works to kill earwigs is diatomaceous earth, which also now offers a nice dispensing bottle which helps cut down on waste and mess.  Check it out at Western Gardens. As for the squash bugs, not the main culprits to the pumpkin plant, they were probably snacking on it also.  We’re still removing eggs as we find them (using the duct tape trick mentioned above) and killing any adults.  Their numbers can quickly get out of hand. Again, diatomaceous earth works well to control squash bugs.

Beneficial vs Harmful Insects – Lady bugs, praying mantis, and birds are a few examples of creatures that feed on the harmful garden insects; hence, we like to see these around around the yard.  When considering how to handle any harmful garden insects, the first reaction should generally not be total annihilation.  Rather, try to reduce their numbers and also allow the beneficial insects and animals to do their part until the plant is mature enough to withstand the damage.

CLICK HERE to read about beneficial insects you want in your garden. Previous Post: « Fresh From The Garden Gift Tags
Next Post: Vegetables to Plant in July and August in Your Garden »